the picture worth a thousand words 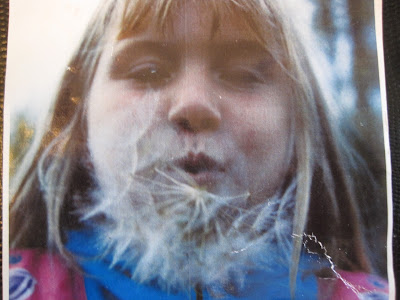 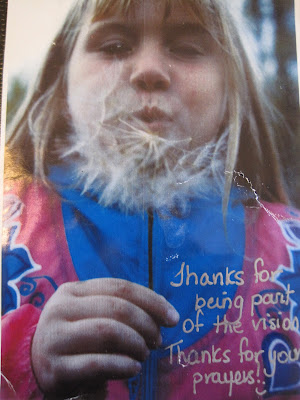 As I was going through some boxes of papers etc, I came across this picture of my daughter Ashley blowing a dandelion that had gone to seed.  For some reason then - I had decided that this picture captured part of our hearts in regards to the ministry.  I printed these pictures back in 2002 and gave them out to people who were encouraging us/praying for us in the ministry God had entrusted to me and called me into.

"Thanks for being part of the vision.  Thanks for your prayers"
At this time, I think back to the past 10 years - and can not believe where time has gone.  Of course the picture is of a younger Ashley - and at the time she was in actuality older than she was in the picture.
I love dandelion puffs.  I love how they go to seed and how they blow in the wind.  I love how the seeds take flight like little helicopters, only to land and come up as dandelions in someone else's yard.
To me - I know dandelions are a nuisance but they are such a bright cheery little weed!!

At the time when I gave these out - I had NO idea what was going to transpire - my call to pastoral ministry - our family's losing Jay - hearing God say that NOW was the time to move ahead - having the kids suggest a slight variation that God had laid on their hearts - leaving pastoral ministry - beginning the build - selling our house of 27 years - living in limbo for 2 years - and trying to now put all the finishing touches on our house which will be used primarily for retreat bed and breakfast for women.

I knew that God had planted a big seed.  But what he would do with that - I had no idea.  Often we say that we really did have no idea how big this project was.  That little seed has flown, taken root and has multiplied and we continue to be in awe of all the things God HAS done and IS doing and is YET to do!  We stand amazed.

So, here is the picture again, and I just want to say one more time - thank you for your prayers and for being a part of this vision
Posted by Joy at 12:56 PM