Some thoughts on a snowy December day 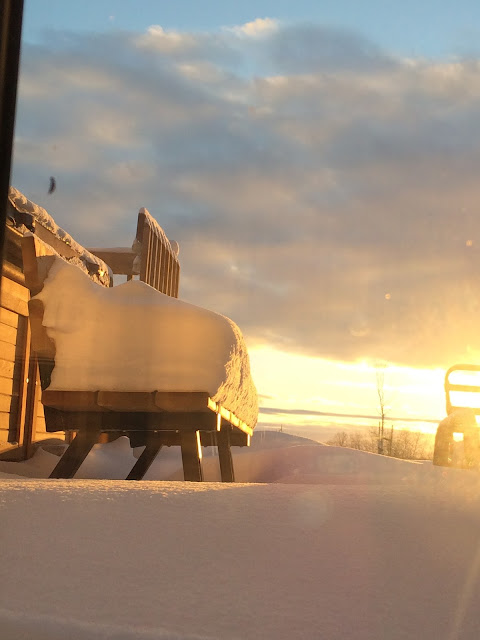 Today is Boxing Day.  We are cleaning up from a blizzard.  Lots of snow.  Outside my husband is on the bobcat cleaning the driveway which was undriveable unless you had a 4 wheel drive.
Such is the weather here in Manitoba!  However, inside the house is warm, the tea is in supply, and the sun is shining brightly.  All is well with the world.

I have been pondering on these past almost twelve full months of this last year.... and it has been good.I am still (usually except for the odd time) the only one running the retreat which includes cleaning, making beds, grocery shopping, food prep, serving, laundry, Spiritual Direction, and the list goes on.While is is so good, it is also "full" and I am not complaining, but it is alot of work.
I am so glad that I know without a shadow of a doubt that this is what God called us to,
and that God gives us the strength needed for each new day.
We are praying for someone to be able to come alongside, but the reality is, we are still
operating as a volunteer, and many people are not around to volunteer for two hours in between retreaters, (4-6 when clean up is done for the next ones coming) and as well, weekends are likely the hardest times to get volunteers.  (Especially in summer and well, who blames them?)

The other thing from this past year is that we decided after our first Evening of Celebration and Fundraising held last year - November 5, 2015 - that we would change it to April and skip this year.  SO plans are underway for April 2017 for our second banquet fundraiser, but in the meantime,
the lack of a fundraiser this year will affect our "bottom line" for the ministry.
Growing pains ... :)
We continue to see God at work.  He is bringing those who need to retreat without us advertising.  I believe that God is growing not only the ministry, but my heart and Alvin's for what he has called us to.  I will be honest - I have made a good salary in a couple other occupations I had before (Early Childhood Educator/Founder and Director of an 87 space daycare centre for 25 years; and 7 and a half years as a Pastor in the church Alvin and I had been in for all our married life) and I realized that money is not everything.  This call to ministry like I have said, is hard.  I knew God called but had no idea REALLY what He was signing us up for!!  I just finished watching a movie "HILLSONG:  LET HOPE RISE" and in it there were some profound quotes, but this one really hit me:

"It's not worth it for what we are being paid.  But it's worth it for what we are doing."
- Joel Houston
I sort of feel the same way right now and would not give up this call for anything!!
Sometimes I feel that being paid would make it easier eventually
(perhaps to pay my personal bills lol) but I realize the "pay" I get from following God on this call far outceeds any $$ I could be paid!!
God knew that!!
He calls us on an adventure - and if we are willing to follow HIM - He ruins us for the ordinary!
And with those words, I will sign off!!

Add comment
Load more...
Newer Post Older Post Home
Subscribe to: Post Comments (Atom)
Women Refreshed at the Well is a
non-profit ministry with charitable status.
We operate out of 5839 Henderson Highway,
Narol, Manitoba R1C 0B5
For more information please call
204-416-3531
All donations will be receipted for income tax purposes.